There's a network fault on Virgin's network at the moment which impacts on several TiVo features, including Catch Up & On Demand. This same fault also affects the TV Anywhere service.

Fortunately, the fault doesn't (or rather, shouldn't) affect recordings and playback of those recordings.
Posted by Jason (Admin) at 14:12 1 comment:

Following Liberty's purchase of Virgin Media, there's been speculation that Liberty would be replacing TiVo with Horizon - Liberty's own next-generation TV platform. Recombu's comparison between the two platforms reveals some advantages for Horizon (like 4 tuners compared to 3 for Virgin's TiVo) and cons (no Catch-Up EPG - TiVo goes back 7 days).

Speaking via C21 Media, Liberty CEO Mike Fries believes that its too soon to compare the platforms or for Liberty to start swapping out TiVo hardware and firmware for Horizon:


Virgin has done a terrific job with TiVo and there’s been a tremendous acceptance among their digital subscriber base – 35% have already asked for the box and received it. We need to learn more about the device and the relationship, but from what we understand at this level, it’s working very, very well.

Thus far when you look at the market, TiVo is a leader in the connected TV space and Virgin Media, as a result, is driving the level of innovation that competitors can’t really react to. So I’d be surprised if we did anything to mess that up at this point.

Virgin's deal with TiVo is expected to run for another 4 years and isn't affected by the change of ownership for the Cable company. After that, all bets are off. Liberty may want to use their own product to standardise rollout through their European markets. Interestingly enough, Liberty Global did consider using TiVo firmware to deploy to their customers, before deciding to develop their solution which became Horizon.

BroadBandTVNews.Com speculates that there could be "some pooling of resources and a roadmap, probably several years down the line, which brings Horizon and TiVo somewhere together. Virgin’s 1.33 million and growing TiVo installs make it somewhat impractical to consider anything else."
Posted by Jason (Admin) at 15:11 2 comments: 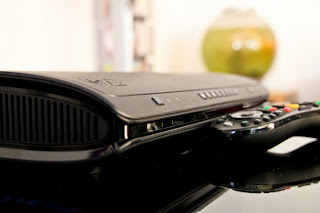 What does Liberty Global's purchase of Virgin Media mean for TiVo?

Following reports that the US-based Liberty Global was interested in buying Virgin - well, they didn't mess about. With a speed which would turn Virgin's TV channel negotiation team green with envy, Liberty Global sealed the deal in the early hours of Wednesday morning.

Repercussions for Virgin's TV customers? None, yet. The company will still be called Virgin Media and despite Liberty Global owning their own STB software, Liberty will continue to use TiVo. If anything, the deal seems more about using Virgin's expertise within Liberty Global's existing cable operations, which operates in several European markets.
Posted by Jason (Admin) at 19:49 No comments:

Multiroom streaming (I'll be calling it MRS from here on) has technically been available on Virgin Media's TiVo since the 15.2 software update. However, its only recently become available for use and at the moment, the number of channels available to stream are limited to the point that none of the terrestrial channels can be streamed at present. You can thank the relevant content owners for that. Add on yet another incoming price increase (you can thank Virgin for that) and the appeal of MRS is diminished somewhat, considering the additional cost of having an extra TiVo.

Once you have your TiVos connected to your home network (either via Ethernet or Powerline adapters) you should be able to see the other TiVo at the bottom of your My Shows screen. In my cases (and others, here, here and well, me here), that really is 'should' because the appearance of the other TiVo is erratic, at best, and that's after rebooting the router, upgrading the router to the latest firmware, rebooting both TiVos, re-requesting the IP address and using Static IP addresses for both TiVos (as opposed to the reserved dyamic ones I use with the 20+ devices on my network). Even legacy TiVos owners have had this issue.

Just to add to my confusion, I could always see the other TiVo on the network via Home > Help & Settings > System Info > Multi-Room Streaming. However, it turns out that this screen merely shows the TiVos you are billed for, not the ones currently on your home network.

Want more confusion? That same screen always lists each billed TiVo has having its Video Sharing Disabled, even now MRS has been enabled on all TiVos. This is a mistake due to be fixed in a future firmware update.

This is my home network:

I even tried swapping my 500Mb homeplugs with the older 200Mb ones I had. I had limited success, in which both TiVos could see each other and stream from each other without disappearing from the other TiVo's My Shows screen. Ah-ha I thought, was the 500Mb homeplugs at fault?

I then swapped the plugs back to the 500Mb versions and to my surprise, both TiVos could still see each other. So, not the 500Mb homeplugs then.

I eventually realised that when when I removed and then reinserted the homeplug connected to the router in the bedroom, that, somehow, enabled the TiVos to see each other. For about a hour or so. After which they disappeared from each other's My Shows screen.

The method which TiVos use to discover each other on a home network is reported to be based on the UDP network protocol, this operates on a 'best-effort, performance based, no guarantee of delivery' basis (streaming itself is based on UDP since streaming video is a time sensitive operation).

I'm guessing that when I disconnected and then reconnected the homeplug connected to the router, my router dispatched a flurry of UDP data packages which enabled the TiVos to see each other - briefly. By the next day, the TiVo were MIA again from the other TiVo's My Shows screen. I wonder if this discovery process used by one TiVo to locate another is robust enough. None of the 20+ devices on my home network have trouble seeing each other when I expect them to.

For now, I've come to a halt to get MRS working. Due to the limited channels available to stream, the only stream-able content I have are episodes of Covert Affairs. Virgin are working on adding more channels for MRS, but given the forthcoming price increase I might be dumping one of the TiVos anyway. Plus I've wasted enough time attempting to get MRS working.

At least I have Last Resort to watch......what do you mean its been cancelled???!?

UPDATE: Virgin are now saying that not all Homeplugs are compatible with MRS, and are recommending that Netgear products be used to stream content between TiVos. I'm currently using the 500Mb homeplugs from TP-LINK and they work fine with the various game consoles, media streamers, Blu-Ray players and NAS Drives on my network. They work fine with all those devices apart from the TiVos.

I'm sure the Netgear 500Mb products are fine products. They should be, they're almost double the cost.
Posted by Jason (Admin) at 20:33 7 comments:

Can we say, about time? I'll have more to say once I've had a play with these long-awaited upgrades to Virgin's TV Service powered by TiVo - until then:

Planned Recordings for Virgin Media's TiVo may fail this weekend

A fault with the metadata supplied to Virgin's TiVo boxes means that TiVo customers should check their planned recordings this weekend:


Your "New Only" Series Link and WishList recordings may fail this weekend. If you have changed the default setting for any Series Links or WishLists to record "New Only", we recommend that you change it back to "New & Reruns" to avoid missing new recordings over the weekend.

If you have missed anything on channels from BBC, ITV, Channel 4 and Channel 5, you may be able to find your show on Catch Up.

We're working on this under the fault reference F002224369 and we'll update this announcement as soon as we have more news on this.


UPDATED: This issue was fixed by Virgin on Sunday morning:


Hi we resolved this issue this morning and as soon as your TiVo box updates it's EPG your Series Links and Wishlinks will start working as normal. So you'll be able to restore them to "New Only" status.

If it hasn't updated the EPG yet you can force it to by selecting the following option Home > Help & Settings > Settings > Network > Connect to the Virgin Media Service now.

Remember if you've missed any recordings on BBC, ITV, Channel 4 and Channel 5 you can still see them using Catch Up.

View the Dynamic Views for this blog

How much for Virgin Tivo?

Plus: £5 per month per TiVo